Every once in a while, someone says something that strikes a chord with you and leads to bigger conversations.

This time around, it came from Rand Fishkin.

Back in September, Rand had revealed about the culture at SparkToro that was inspired by Italian Slow Food. It was the antithesis to the idea of hustling for the sake of hustling.

In a world that makes you feel like a failure if you aren't grinding all the time, it takes courage to draw boundaries and be okay with it.

And Rand is someone who has drawn these boundaries with a pencil, highlighted them with a marker, put glitter on it, and showcased it to the entire world!

At the UNMUTE stage, he joined us to talk about the idea of Chill Work.

And we kicked it off with the most important question - Who is your hairstylist?

Marcus from the Singing Barber at Seattle, you rock!

After Moz, Rand knew he wanted to have another shot at trying to prove himself as an entrepreneur.  At the same time, he wanted a business that was very different in its stylistic approach, right from how it raised money and how it hired to what it was foundationally doing from a marketing, content, and product perspective.

Since the marketing software universe was very familiar to Rand, he decided to dive in there.

“I strongly considered building an alternative to Google Analytics. But it's just such a complicated, challenging field and Google Analytics is free. I think it's very tough to compete with free”.

So how did SparkToro happen?

“SparkToro came about after my last few years at Moz, especially when I was trying to help businesses that either struggled to get search traffic or where search was not the best marketing channel. In some cases, people go to Google, search for what they want, and then they buy from the businesses that come up. 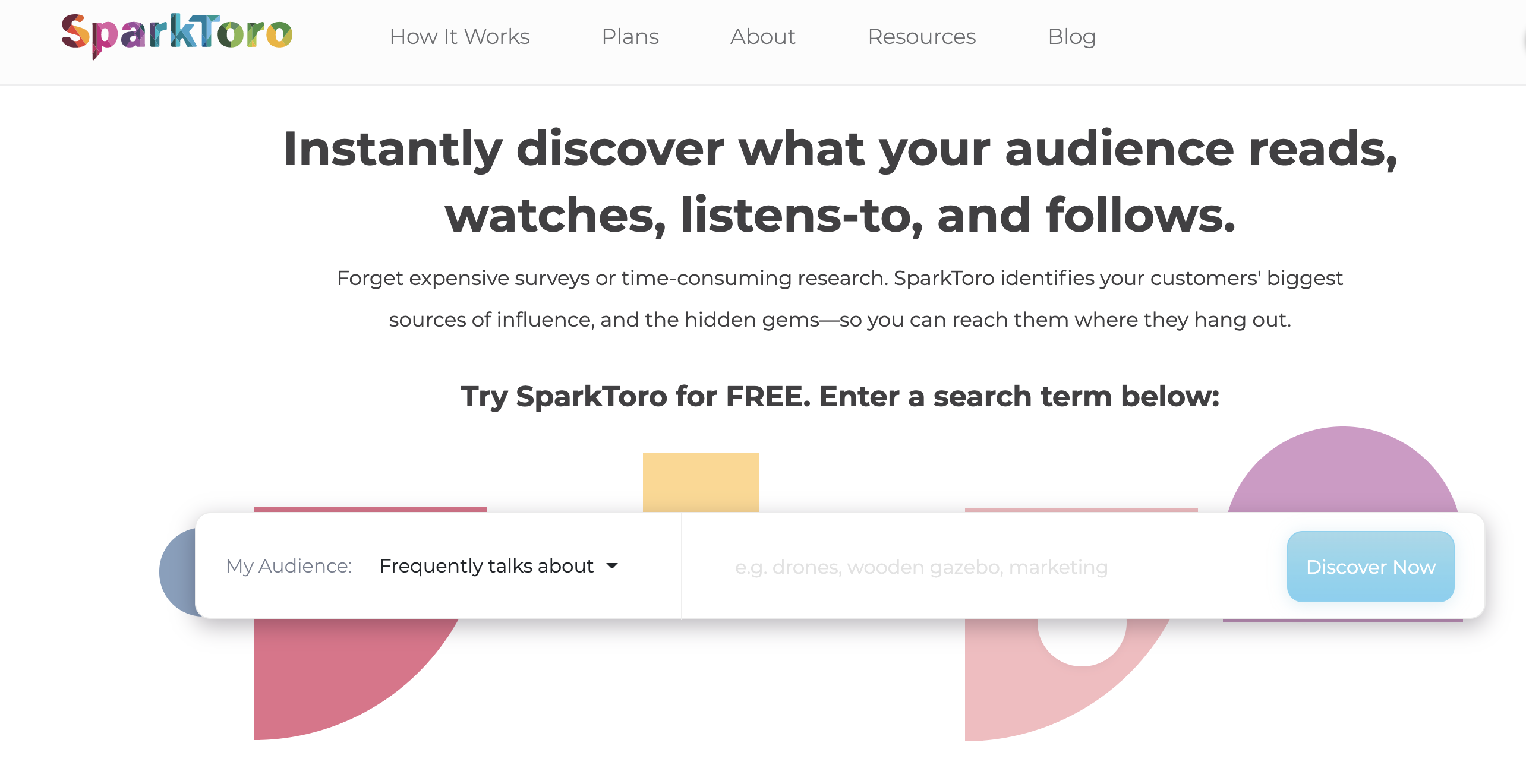 But in a lot of cases, that's not how the customer discovery process goes.

And when that's not the case, there's just not a lot of great opportunities and options out there for software that tells people, 'Oh, here's where you can go to effectively market your product or service'. That's what we wanted to build with SparkToro.

We wanted it to say, 'Here are the sources of influence for any field and here's how you can get in front of them!'"

The idea with hustle culture in the work world is that you’re working hard not with the primary focus being the results that you get from that work, but with the aim of taking pride in how much you work, how long your hours are. It's working hard for the sake of working hard.

And Chill Work is the absolute opposite. 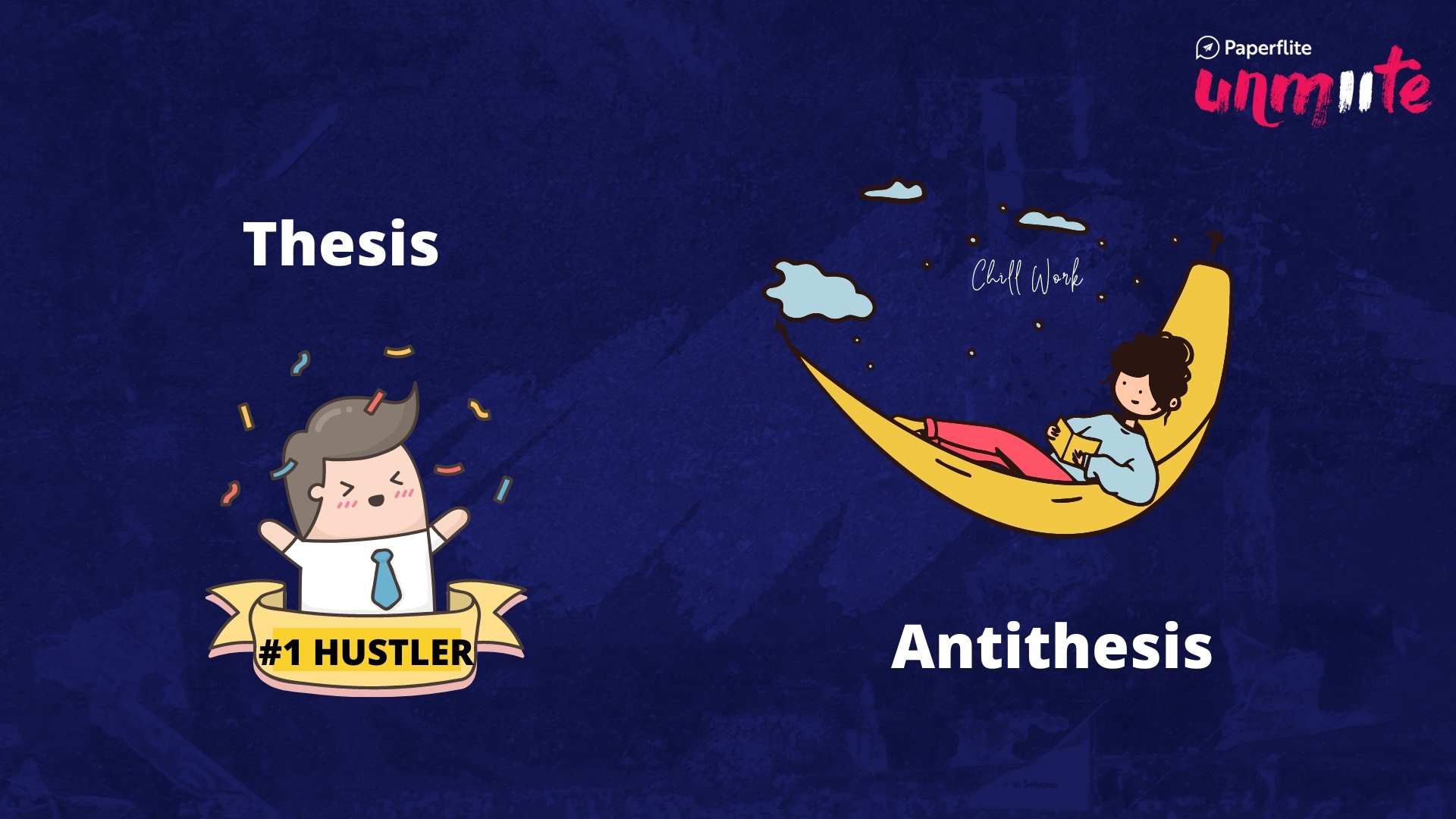 It's working only as much as is minimally necessary in order to get the most important things done. And leave everything else aside. Chill Work is focusing on outcomes and results; not on inputs and amount of hours and work quantity.

Chill Work is about working when it's best for you to work - when you have the time and the inclination, when you are in the headspace and health space to do your best work rather than about demanding a rigorous schedule.

“So Chill Work for me is often done on a Saturday morning instead of a Monday morning. It's done on a Thursday afternoon instead of every day. It's done after I've had a few days off, rather than being always on. And I think the other thing that's important about, you know, Chill Work, as we conceive it at SparkToro is that it is done in service to the rest of our lives. 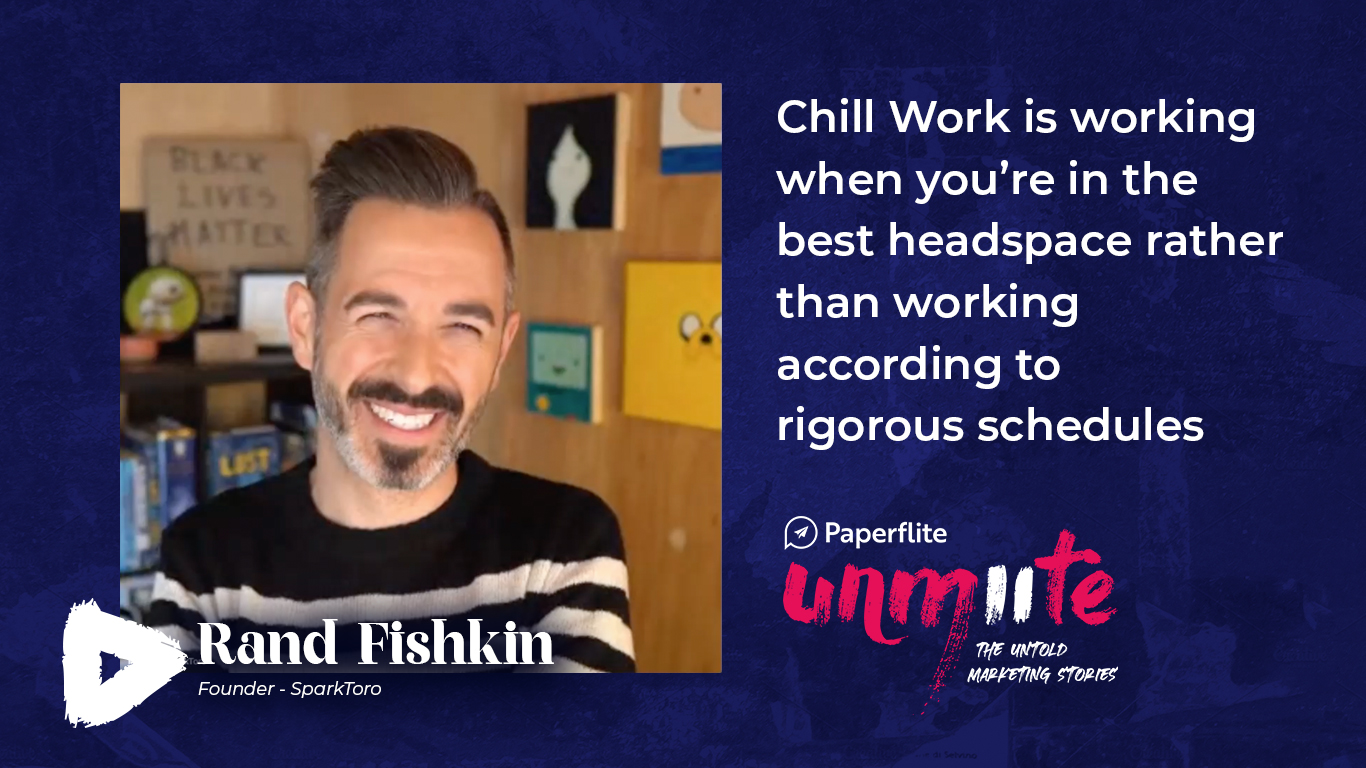 While not everyone is open to the idea of embracing Chill Work as a company-wide philosophy, there are still ways for individuals to practise it personally.

All of us work better when we’re well-rested and are in a good headspace. So maybe try pulling back on the quantity of work that you do. This way, you’ll be able to deliver higher quality output in the hours that you do work.

Also recognize the fact that right now there are a lot more jobs than there are people to take them. This wasn’t true for a long time, but today it is. You have the freedom and flexibility to pick where you want to work and who you want to work for.

You’ve got to find companies that embrace, support and reward the kind of work you’re aligned to. When there’s a mismatch in this mindset, it leads to frustration and conflict.

So having those conversations with your employer and saying, “Hey, I see what they're doing over at SparkToro and they’re having a lot of success. Maybe we could embrace some of those ideas because always being in a work mode is not healthy.  And I'm not sure how long I can stay here in an environment like that. I'm going to do amazing work. But I'm not going to do 50 hours of work”

We’ve got to start those conversations in an empathetic manner.

Typical marketing—especially content—calendars contain items that have to be ticked irrespective of what happens. Moz was no different.

But SparkToro doesn’t tie anybody to these rigid calendars. Rand and his team have very few commitments that they try not to miss out on, like their email newsletter. In the occasional case that they do miss sending it on a specific date, the delay would still be fine.

The cultural norm at SparkToro is about saying, “Let's commit to fewer things. And let's commit to doing the few things that we do extraordinarily well and in a way that adds value for our subscribers, rather than burning ourselves out by massively over committing. Signing up to do less but better is an option that not enough content marketers are exploring”.

At SparkToro, a lot of the content ideas come from social media and email. The team consumes a tremendous amount of content from various places like LinkedIn, Hacker News, Google News Feed, Pocket etc, that they use to inform what they create content about. 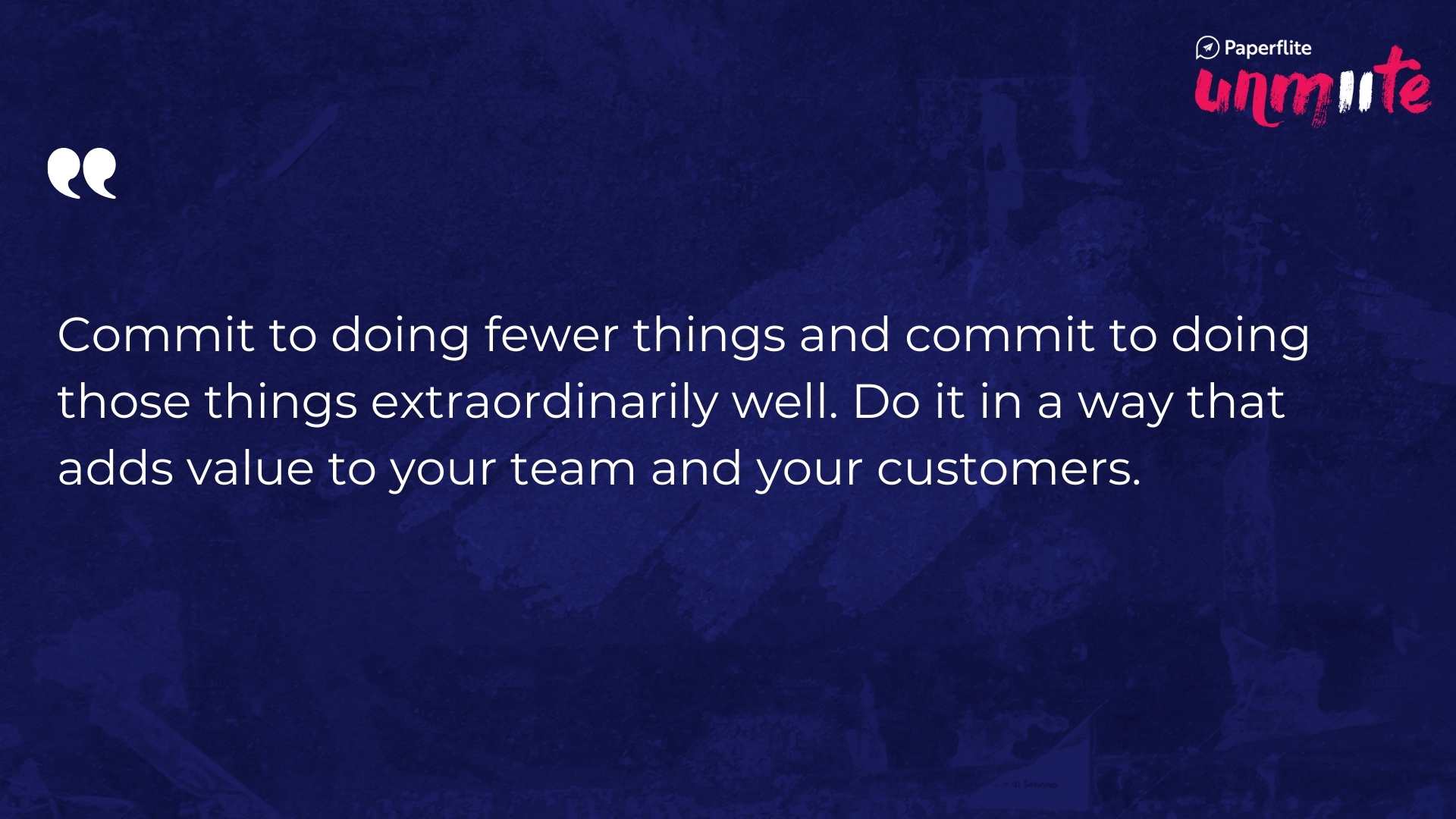 If bribed with good pasta and fancy cocktails, what’s one untold story you’re willing to share?

“10 years ago, when I was doing SEO, and a lot of content marketing at Moz, if you wanted to be successful in search social content, email channels, you could often do that with exactly the same piece of content. I could publish a single blog post that would rank well in Google, do well on Twitter, do well on LinkedIn, get some action on Facebook, and do well in my email newsletter. Today, that's not the case anymore. And this is because the networks have bifurcated and segmented by what they're optimizing for.

And that is because those different channels have different requirements to succeed. This is one of I think, the secrets of the marketing world that's not talked about as much. And there are a few folks who absolutely do it and do it well. But there's still a lot of belief among, you know, marketing agencies and clients that you should be using that 10-year-old method of one piece of content that does well in all those channels”. 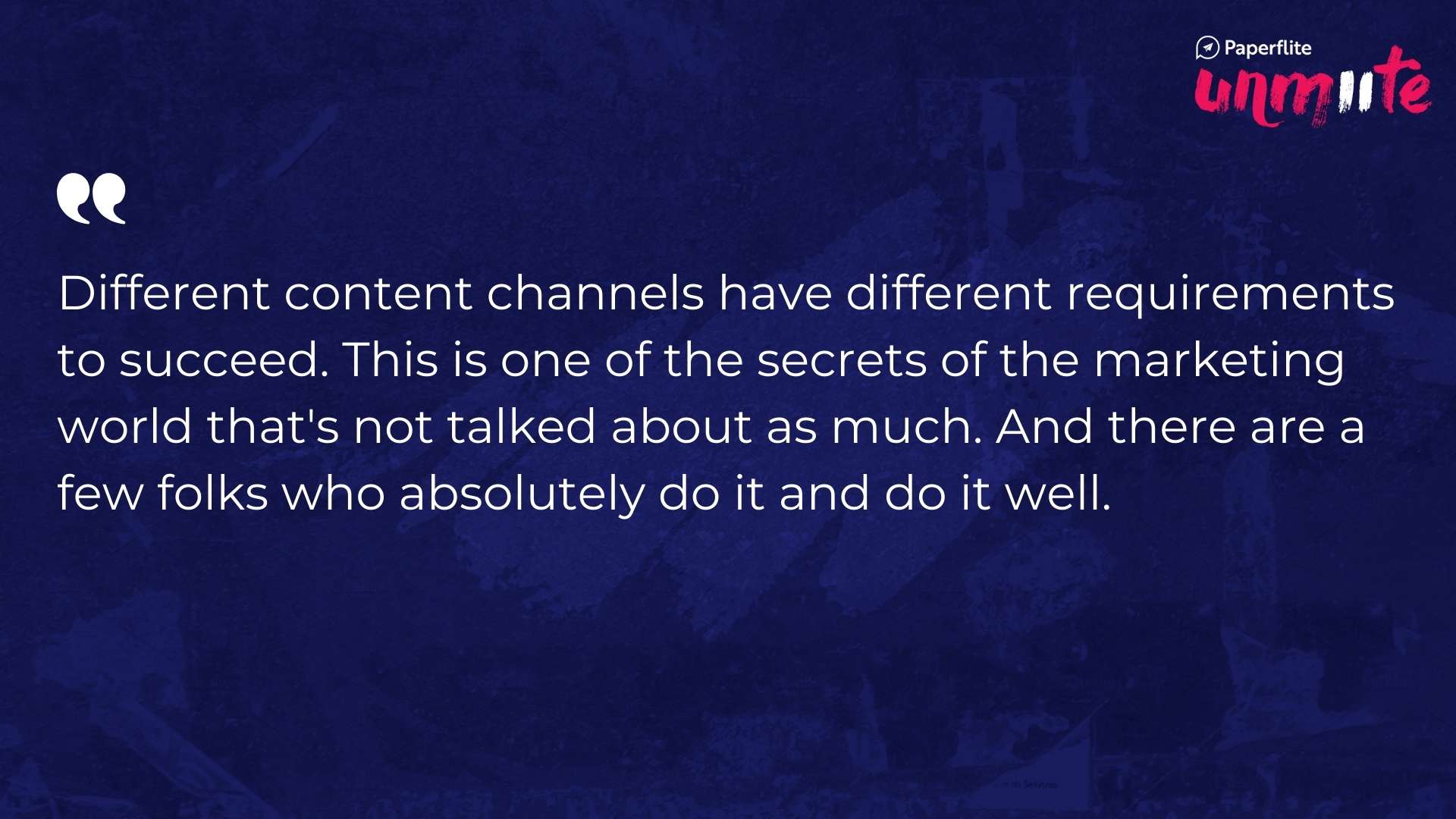 Stand out with Signalling