Stand out with Signalling | Paperflite Skip to main content

The markets are crowded. There are too many products, too much advertising. This means that as marketers, our job is more difficult than ever. We need every advantage we can get our hands on.

One of these that underlines all the marketing we do is signalling. In B2B marketing, signalling becomes even more important in the context of categories and executive decision making.

Sairam Krishnan joined us on the UNMUTE stage last week to share stories of how brands have used signalling to their favour.

Here’s a first-hand narration of the session as seen on Sairam’s newsletter, the CMO Journal:

Last week I spoke at Paperflite’s UNMUTE, an online conference with the theme of telling marketing’s untold stories. This invite was something particularly important to me as I got to share the stage with some of my own marketing heroes, especially Rand Fishkin.

I spoke about signalling, something we marketers don’t talk enough about and is one of those subliminal marketing tactics that great marketers consistently use but never name. The audience was mostly marketers, same as here, so I could geek out a bit.

What follows is a slightly condensed and edited (for readability) version. It was written for a presentation, so please excuse any niggles in the narrative. Signalling has been one of the ideas that has guided a lot of my marketing thinking, and I hope you enjoy it.

A few years ago, I was leading marketing for a SaaS product. Now the company had another product, the flagship that was a cash cow, but it had not been growing for some time.

The marketing for this product was completely inbound driven, and the company spent relatively little on Adwords.

But it wasn’t growing.

So we did what everyone does at such times: We had serious meetings. And in one of those serious meetings, a young analyst went through the numbers and had a comment: No leads were being directly attributed to the blog, which obviously meant that the blog was a waste of time, wasn’t it?

So they stopped. They diverted the resources, wrote SEO pages instead, wrote copy for ads, and completely ignored the blog. 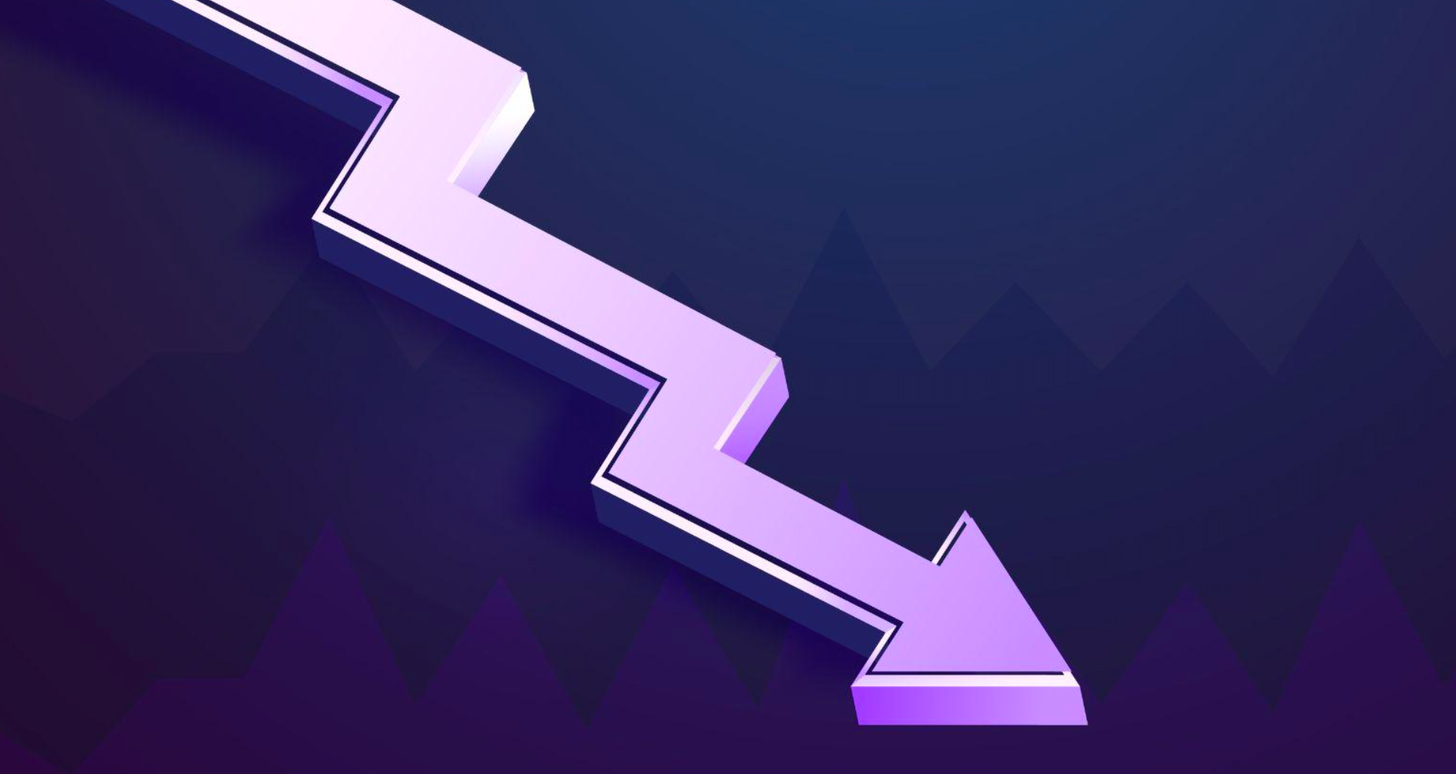 Within two months, the numbers started dropping, and dramatically so. Everyone panicked, and we set up some in-depth interviews to see what was up.

What emerged was that though no one was signing up directly from the blog, it was seen as a marker for quality.

If the blog was updated, and had a great post up, it told prospects this was a company that could be trusted. The quality of the writing meant that this company cared, and if they cared, it meant their product would be good.

In short: Among other things, the blog was a signal. It was telling prospects something good, something positive. And when it was taken away, the numbers dropped.

This is what I mean when I say signalling, and it’s one of those things that good marketers intuitively understand, and not so good ones completely don’t. It gets explained away as talent or good taste, but it’s more than that. There are ways to master it, and that’s what we will be discussing.

The best definition of signalling I found was in Rory Sutherland’s blockbuster marketing book Alchemy, which you should definitely read.

He defines it as ‘the need to send reliable indications of commitment and intent, which can inspire confidence and trust’.

Note the words: Indications, meaning you have to show, not tell. And inspire, meaning the other party has to intuit the signal. If you have to explain, it’s not a signal.

But what are you doing when you are consciously sending a signal, though? You are attracting attention, like how I used to flick my (then) long hair in college when a pretty girl walked by.

Because if you don’t send a signal, you don’t help your prospect choose. And as we well know what happens when choices baffle a customer, they take the safe option: they don’t do anything.

Which is exactly what we marketers want to avoid. 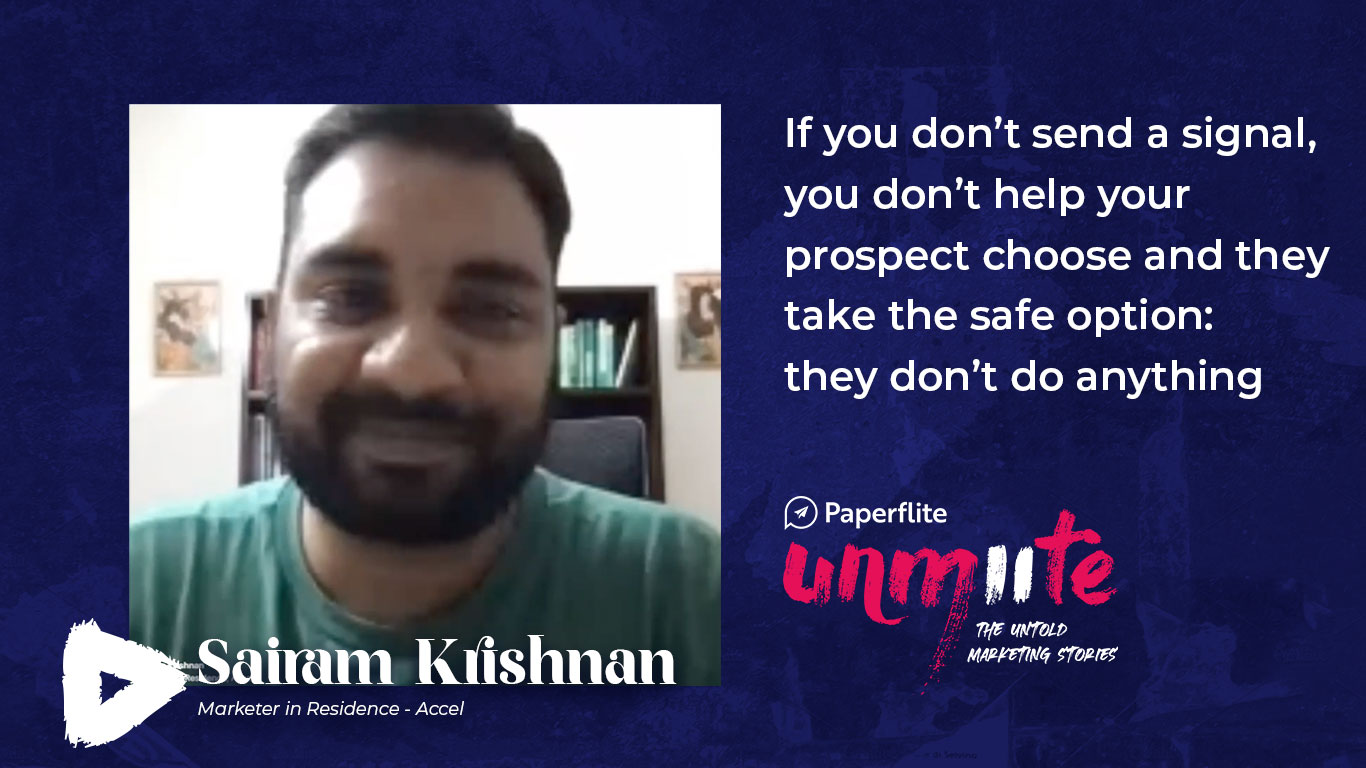 We’ll delve now into the different kinds of signalling that we as marketers selling software can do.

And I’ll show, not tell.

Signal what you are

In Alchemy, Rory Sutherland writes of a cafe near his place in London which passed through a series of owners, all of whom tried very hard to make it work. But couldn’t. Sutherland didn’t understand. There was good food, great coffee, and the location was great. Why wasn’t it working?

It eventually did, after the fourth owners did something none of the earlier ones had: They made up a small area outside the cafe into a sitting space, and made sure there was a sign showing that coffee was available. 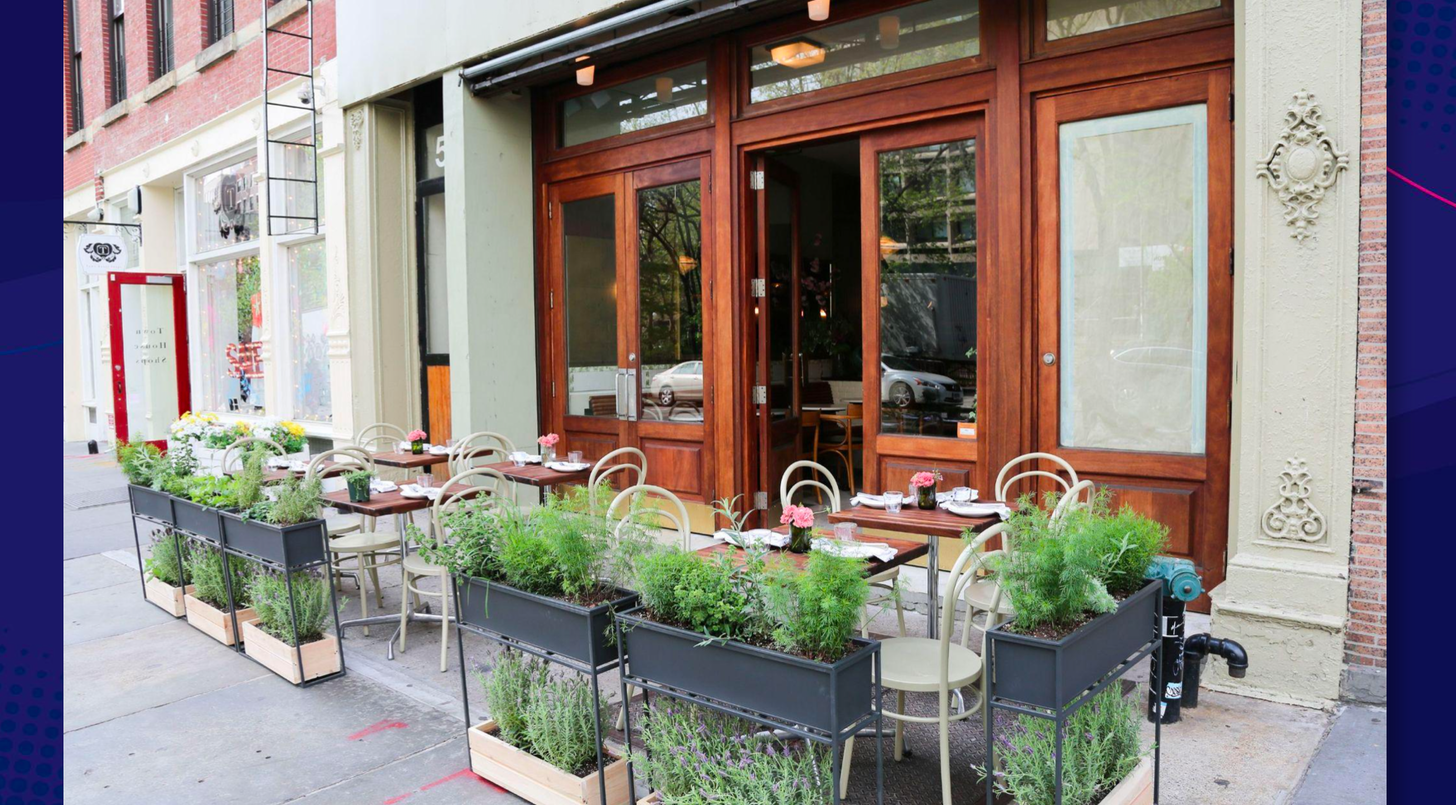 Customers poured in. The cafe became a roaring success.

What had these owners done different? Nothing dramatic at all. They had signalled what they were clearly: A cafe. There was no confusion: This was a cafe, you’ll find coffee here. And that was enough.

A couple of years ago, there was a designer discussion on Quora about why all SaaS websites were starting to look the same. It was a trending topic among designers for a while: They all got together and lamented the lack of imagination of marketing, how marketers were creatively stunted, did not understand design, and should all be fired immediately.

It was hugely entertaining, but it was also wrong. All SaaS websites tend to look more or less the same because we are signalling to you, the prospect, what we are. And because you expect the SaaS website to look a certain way, we are giving it to you. To make your thought process easier.

We are signalling what we are.

Back in 2011, Freshdesk, the startup where I began my career, had a Twitter run-in with then much-larger-company Zendesk. An independent analyst thought that we were too similar to Zendesk, and badmouthed us. And quite ill-advisedly, as it turned out, Zendesk’s respected CEO Mikkel Svane barged in to the conversation, calling Freshdesk a ripoff. 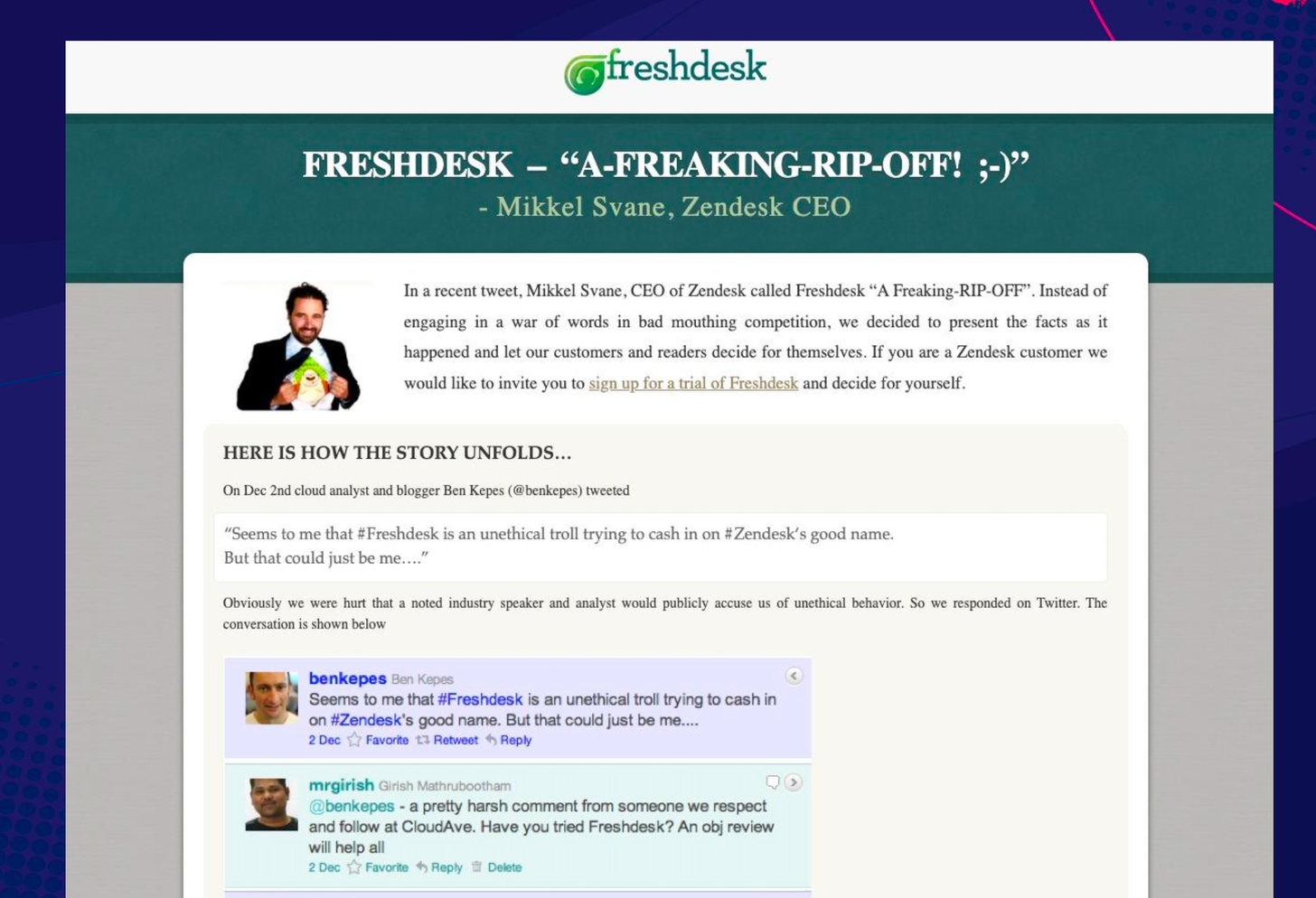 My instinct at the time was to let the jibes be. It was a needless distraction, and who cares what random folks thought, right?

My CEO Girish Mathrubootham understood the opportunity in front of us, and took it.

He took the fight off Twitter, made a website, and laid out the entire conversation in black and white, framing the altercation as a Freshdesk vs Zendesk scenario. And you know what happens when things are framed this way? People take sides. And they did. It was embarrassing for Zendesk, and for a little startup from Chennai, it was PR gold.

But that wasn’t the whole genius of the manoeuvre. By framing it as Freshdesk vs Zendesk, Girish told the world that Freshdesk was like Zendesk, that we were equals. When in reality, we were not. Zendesk was a much larger company at the time, and we barely had any revenue. But the world didn’t know that, right? They thought we were like Zendesk.

By framing the conversation the way he did, Girish had signalled what Freshdesk was like, or at least what we wanted to be like. It was genius, and it worked out magnificently.

A few months ago, Freshworks went public on NASDAQ, and a few weeks ago, went beyond Zendesk’s market cap. 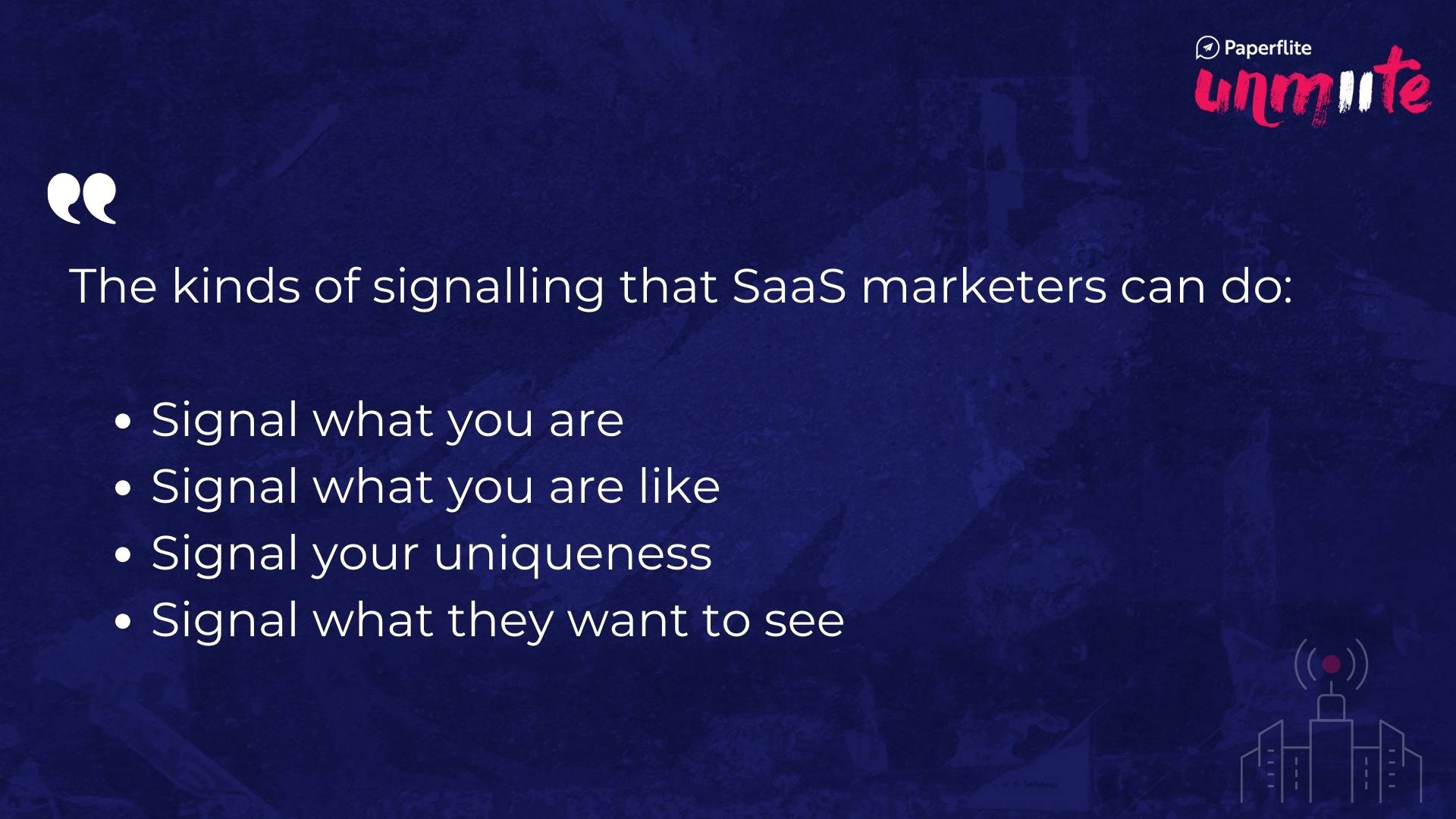 Customers understand what kind of brand you are by the things you do, not by the things you say. And every little interaction with the brand, or news about it, informs their perception. This is important to understand when designing campaigns or messaging so that you signal your uniqueness to your customers.

Consider the greatest marketing campaign in B2B history: Salesforce’s announcement of SaaS to the world, the NO SOFTWARE blitz masterminded by Marc Benioff.

The target was Siebel and other on-premise software companies. All of us know the campaign, and what Benioff and Salesforce did: The taking over of Siebel’s event and making sure everyone heard the message was one part. But the other part was the audacity to do the thing itself. The storming of the Siebel citadel sent a signal to consumers that Salesforce was a unique company, willing to shake things up, and take risks. And a segment of consumers responded to that.

In 2018, we at Freshworks did the same thing to Salesforce. We flew a blimp around Salesforce Towers in San Francisco on Dreamforce weekend. It had #Failsforce printed on it, and it was a knowing nod to the original NO SOFTWARE campaign. We wanted it to feel that way. The idea was that consumers see the campaign, and equated our audacity with what they had seen Salesforce do all those years ago.

This was a signal too: We were signalling our uniqueness.

Signal what they want to see

We know who this is.

Elizabeth Holmes is one of the tech stories of our generation. She and Theranos promised much, but took the world for a ride. This begs the question: How did some of the smartest people in the world get taken in by the charade?

Because Holmes was a master at signalling to people what they wanted to see.

Holmes adopted Steve Jobs’ signature style of a black turtleneck. She frequently referred to Theranos' systems as 'the iPod of healthcare' and nicknamed one of the systems the 4S, a reference to the iPhone. When Theranos was ready to start designing its website, Holmes chose advertising agency Chiat\Day, because it was the same company Apple had used for some of its iconic ads.

Was this all there was to it? No, of course not. But all these trappings helped.

Some of the biggest investors in the world saw what they wanted to see, and bought in.

This is also why every startup a few years ago used to lead with AI/ML, and these days Web3 is all the rage. Investors are listening to these words, and startups are simple giving them what they want to see.

Sometimes, when it suits us, we should too.

I've told you a bunch of marketing stories, an attempt at decoding great marketing.

And what I want you to take away is just one question. When you are building a website, or are planning a campaign, remember to ask yourself the question: What am I signalling?

I don’t know what rabbit holes this question might lead you to, but it will definitely lead you to better marketing.