Government agencies are best known for policymaking and its implementation, and publish white papers to let the general public know about it.

These institutions use policy white papers to know the government’s vision and stance on socio-economic, political, financial issues, and chart their future course of action.

In this post, we will focus on the best policy white paper examples by governments across the globe. These white papers are well known for their authority, depth of research, coverage of topics, and the power of influence that they wield on their target audiences.

Some of these may not have a lot of visual content and will be text-heavy. That is because governments are trying to drive home their point of view and will not necessarily rely on imagery to get it across. They may not even have a marketing campaign to accentuate it.

Policy white papers are in stark contrast to B2B corporate white papers, which appeal to specific target audiences with a mix of visuals, text, and research. They have fixed objectives to meet - such as increasing website traffic, educating their target audience, boosting their subject authority, etc.

Governments publish policy white papers for a broader audience with diverse needs and requirements. A few examples of their objectives could be:

2. Improve bilateral relations with neighboring countries with a specific focus on export-import policy

3. Find newer ways to feed the ever-growing population of a country

Now that we have a fair idea of why governments create white papers, let's look at some of the best examples: 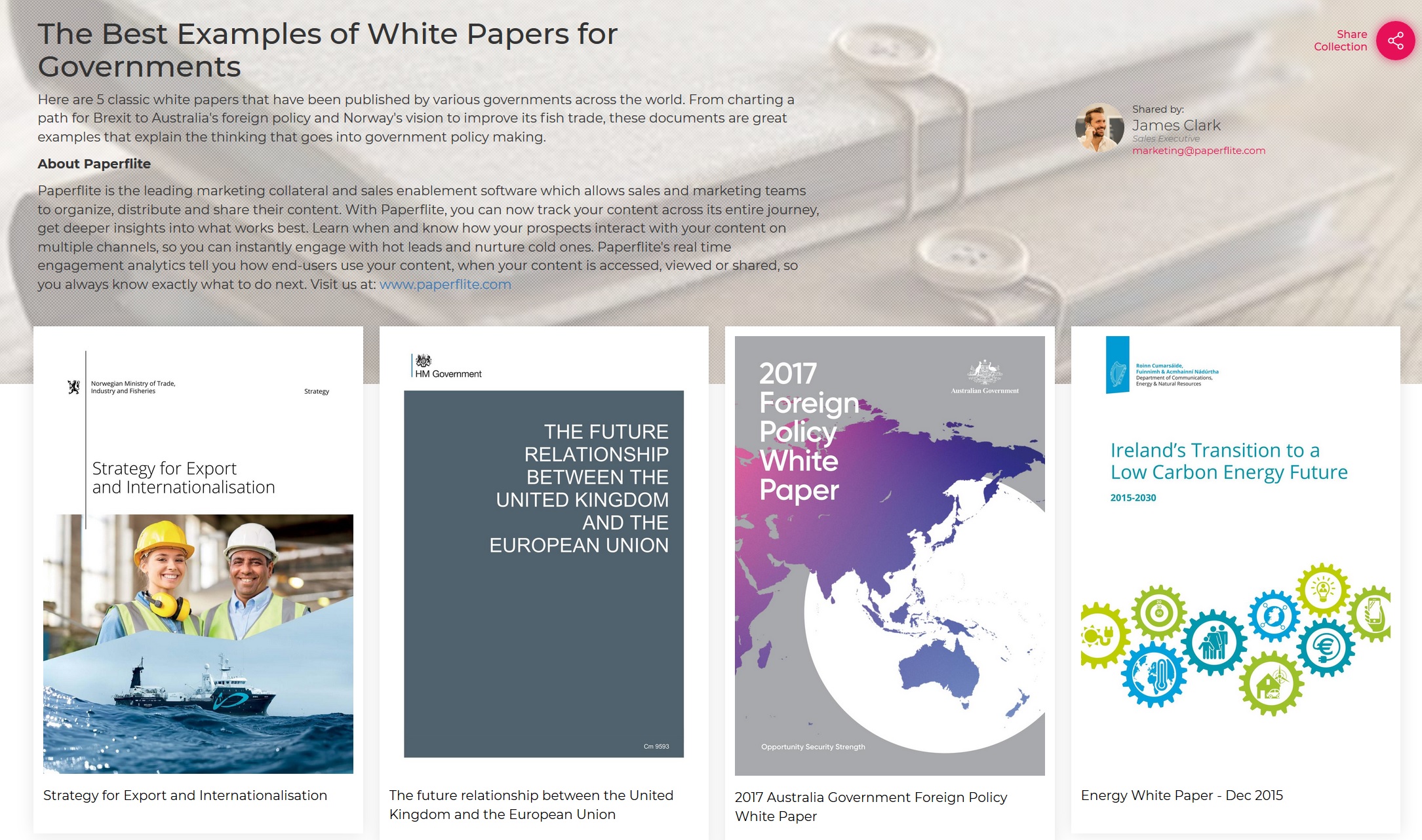 The Best Examples of Policy White Papers by Governments

1. The Future Relationship Between the United Kingdom And The European Union

Published by: Government of the United Kingdom

This policy white paper was presented by Theresa May to the British Parliament laying out the roadmap and governing principles as they secede from the European Union.

It documents every aspect of their exit from EU - vis-à-vis their economic partnerships with other EU members, security aspects, cross-cutting/cooperation, and institutional agreements. Each of these chapters has a summary before delving into greater detail. 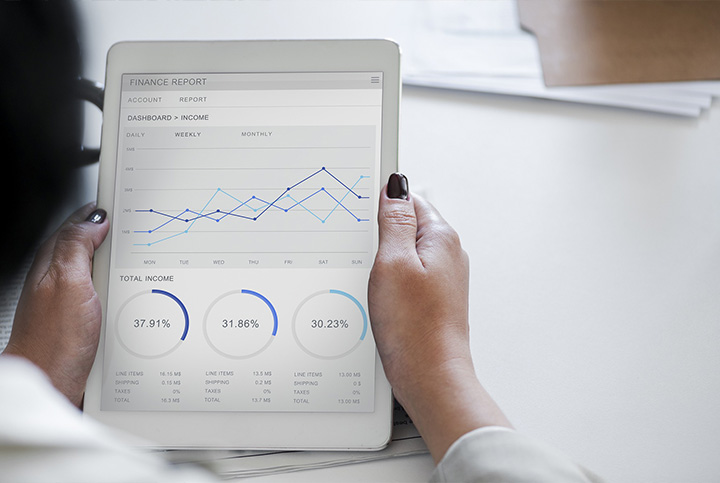 The Australian government’s white paper on their foreign policy is another classic example. It lays out its ideologies and doctrines on essential aspects such as their partnerships within the Indo-Pacific region, cooperation with global powerhouses, and the threat of terrorism & extremism.

Signed by the then Australian Prime Minister, it is the government’s mouthpiece on foreign policy affairs. It is substantiated with examples and case studies (that have benefited the international community) and has a sprinkling of visual imagery to support its principles.

This policy white paper is a perfect example of a government’s duty and responsibility towards its citizens, neighbors, and trading partners in a manner that its citizens comprehend it.

One of the more livelier documents in our collection, it sets out Ireland’s energy future. Similar to policy white papers that we came across, it validates the government’s vision in their transition to a low carbon energy system.

However, unlike a lot of other white papers, this one had an 8-page executive summary that gave a glimpse of what was ensuing in the following pages in much granular detail.

It explains the Irish government's vision to achieve a low carbon future, including the citizen's role, the technology that enables it, regulations, and the requisite infrastructure.

Figures, charts, and diagrams support all of the above aspects. As countries plan their actions for controlling greenhouse gas emissions under the Paris Agreement, the Irish’s government’s white paper is a shining example. 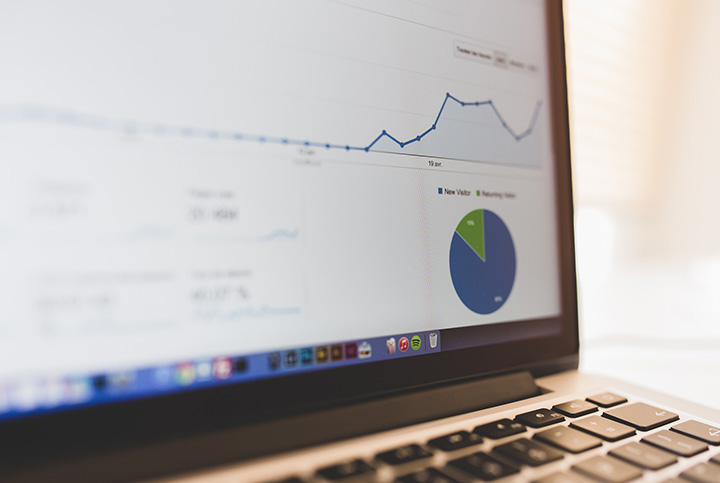 4. Strategy for Export and Internationalisation

Produced by: Norwegian Ministry of Trade, Industry, and Fisheries

This policy white paper describes how Norwegian authorities are committed to facilitate internationalization and increase trade and investments to and from Norway.

Norway has one of the longest coastlines in the world, and so international trade is its primary focus areas to generate value and create employment.

With signatures of government authorities, this policy white paper is a blueprint of how the government intends to create value through free trade agreements, bilateral investments, and policy frameworks. We like this document for its exquisite details that is embellished not only with charts, diagrams, and pictures but also highlights from their continuing initiatives.

Published by: The Government of Iceland

The highlight of this white paper is the Icelandic government’s vision of improving the education system in Iceland. It is a relatively smaller document as compared to other pieces that we have included in this blog. It talks about the need for education and competence in the new century and then maps out the country's position in the context of educational systems spread across international borders.

This comparison is handy in understanding the present problems of their education system. Moreover, while every government has problems to solve, acknowledging them in a policy white paper and laying out steps to eradicate them is a welcome move. Similar to other white papers, this one has charts and diagrams laden with figures that help put the problem in perspective.

We hope you liked this collection. Do write to us at marketing@paperflite.com if you have any favorites that you'd like to feature here.

Here are the ‘Best White Paper Examples for B2B Marketers,’ based on our research of more than 70 white papers across nine industries.